Welcome to our Village

Annalong cornmill was built in the early 1800s and operated until the 1960s, before closing it was one of the last working watermills in Northern Ireland. The building contains many of the original components and is open to the public to view the inner workings that benefited many farmers at the time. It has a grain drying kiln, three pairs of millstones and a 15ft waterwheel (a form of technology over 2000 years old) and a 1920’2 Marshall “hot-bulb” 20hp engine power it. 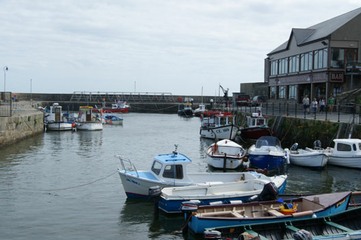 Annalong harbour has also received its fair share of regeneration over the past number of years. It dates back to the early 1800s and in later years was made bigger to receive schooners carrying granite which was used to build the nearby water dam at Silent Valley. In recent years the harbour has been deepened and a pontoon added making it easier for small fishing boats and cruisers to dock at all states of the tide. In one of the neighbouring gardens the leading light for directing boats into the harbour remains.

On 13 January 1843, boats from Newcastle and Annalong set out for the usual fishing stations but got were caught in a gale. 14 boats were lost in the heavy seas including a boat that had gone to the rescue. Only two boats survived, the Victoria and the Brothers. 76 men perished, 46 of whom were from Newcastle. 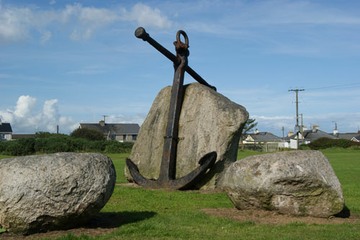 The Marine Park offers a unique combination of facilities to enable visitors to have a comfortable and relaxing day out. The marine park hosts the slip way that is able to launch a boat at all states of the tide. The park now hosts a state of the art swing park for the kids with ample car parking and very well maintained toilet facilities. 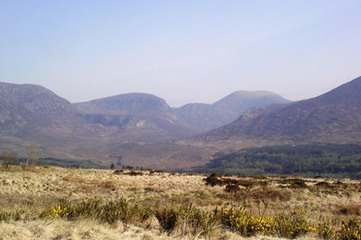 The Mourne Mountains are the highest and most dramatic mountain range in Northern Ireland, its summits crowned by granite tors. The mountains themselves are criss-crossed by a network of paths and tracks, providing enthusiastic walkers with incredible opportunities for exploration. The National Trust own 1,300 acres of the mountains including parts of Slieve Donard and Slieve Commedagh and the Water Comission own the area inside the boundary of the magnificent 22 mile Mourne Wall with the rest tended by local farmers still using the land for agriculture.

There are 6 peaks over 700 meters with Donard the highest at 849m and the range is crisscrossed with a multitude tracks and paths that would take years to explore fully. Rivers, lakes and reservoirs litter the area and dams have been build over the last century ensuring that the Mournes are not only a beautiful place to visit but also essential as the main water supply to the Northern Ireland capital, Belfast. 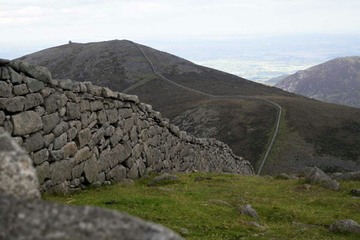 Built over 18 years between 1904 and 1922, the 22-mile Mourne Wall encloses 9000 acres of land which drains into the Silent Valley and Ben Crom reservoirs. The wall covers 9000-plus feet of ascent, rising and falling over 15 mountains including Slieve Donard, Slieve Commedagh and the ever popular Slieve Binnian. While it provides a physical challenge to complete in one day, it is unquestionably the greatest long walk in the Mournes, providing views and memories unsurpassed in Northern Ireland.

Check out our Places to Stay page to see available accomodation now!

You can find out more about which cookies we are using or switch them off in settings.

This website uses cookies so that we can provide you with the best user experience possible. Cookie information is stored in your browser and performs functions such as recognising you when you return to our website and helping our team to understand which sections of the website you find most interesting and useful.

You can adjust all of your cookie settings by navigating the tabs on the left hand side.

Strictly Necessary Cookie should be enabled at all times so that we can save your preferences for cookie settings.

If you disable this cookie, we will not be able to save your preferences. This means that every time you visit this website you will need to enable or disable cookies again.

This website uses Google Analytics to collect anonymous information such as the number of visitors to the site, and the most popular pages.

Please enable Strictly Necessary Cookies first so that we can save your preferences!